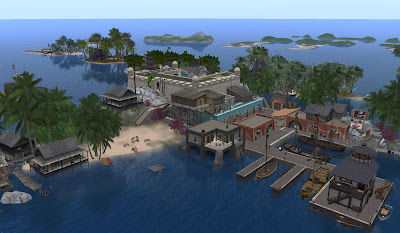 Arrrr! Shiver me timbers! Tis be "Talk Like A Pirate Day." An' time ta takes a look at a few pirate-themed places in Second Life. First, if ye wish ta catch up on yer pirate speak, be checkin' our old article on th' lingo. 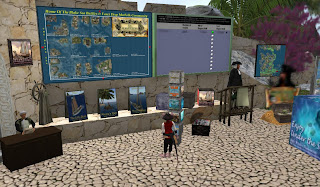 In the past, we wrote about a detailed pirate themed area "Morgan Straits." It's no longer around, but there are other places one can engage in a little swashbuckling. One place you'll be wanting to check out is the Blake Sea. This is a HUGE area of water and islands east of the Second Life mainland. To join up with the Blake Sea Battles Group, head to Blake Diego (215, 45, 36)


There, one can get information about the group, in addition to a couple freebie craft, and one demo of a small armed ship. You can also find schedules of events, such as the sea battles. 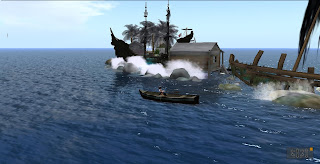 Typing "Pirates" in Second Life search will get you a number of adult-themed roleplay areas. Near the top of the list were a couple that weren't, Trade Winds (51, 139, 22), and Pirates Destiny at Nassau Stronghold (126, 119, 25). But these places may not be friendly to nonhuman avatars, except merfolk. They have some freebie items, such as clothes, swimmer HUDs, and a merchant at Trade Winds had a freebie vessel, but while they may not mind a furry tourist walking around, being welcome in a combat RP may be another matter. This is too bad, as going about Trade Winds, there was some good scenery. But looking at Blake Sea Battles Group, the charter doesn't say anything about problems with anyone having a tail. 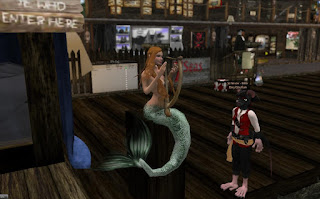 Besides these places, no doubt there will be a lot of venues holding pirate themed events, such as Club Cutlass near the SL Newser office. But to enjoy pirate-themed fun all year round, the best place in terms of volume of water and welcoming of one's looks is the Blake Sea.