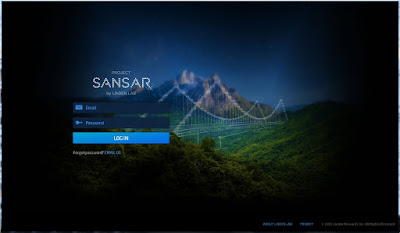 With the public viewing of Linden Lab's "Project Sansar," it's next generation virtual world, later today, A German blogger, Echt Virtuell, posted a link to what looks like it's login page, along with a screenshot of it, at www.projectsansar.com. The page is not a static one, the white outline of various objects morphing and changing with the passage of time against a wilderness backdrop.

Project Sansar has been making real-life news, one article appearing on CNN's website a few days ago on September 15 by Heather Kelley. She describes Second Life as "an aging virtual world" that while still used by "hundreds of thousands of loyal users" and profitable, "but it's not the future. ... Starting fresh gave Linden Lab a chance to rethink how a virtual world is organized and how it makes money." She describes a few things what the Lindens have been building, "They've made a desert scene with crazy big machinery, weird futuristic lounges and a famous landmark. They've even created an exact replica of a conference room in Linden Lab's San Francisco office, down to the objects on the desk." And it seems the release date, once described as "sometime in 2016," has been moved back to "by the end of 2016."