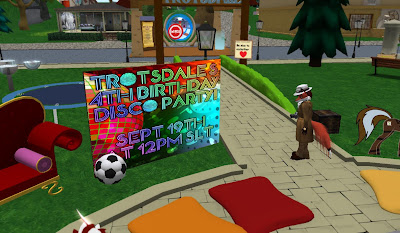 Saturday September 19 was the fourth anniversary of the Trotsdale pony sim. And they celebrated with a big disco party, the event starting at Noon SL time. 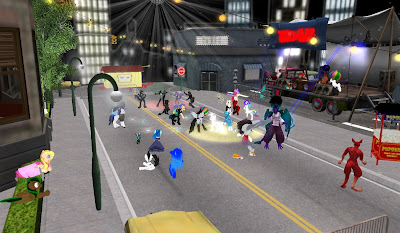 The event took place in a skybox 3000 meters high above the sim. Various DJs, such as DJ Dash  (shurikenangel) played music for the event. ScentualLust also played some music for the occasion at one point. Once in a while, a random prize giver would give a lucky attendee a gift, such as an avatar mod or 250 Lindens. 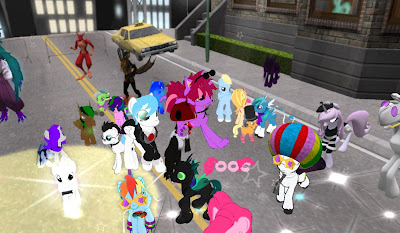 The party got quite packed at times, with a few dozen ponies, some furs, and a couple normal human avatars dropping in. There were quite a number of jokes cracked, being September 19 including a pirate joke or two, and well wishes for the sim and community.

"None of this would be possible if it were not for Nyan (xnyannyanx). Daydream (brian.rutherford), and Cloudy Skies (charlie.sapeur).  They helped big time with helping build the party area.  Also the awesome DJs and entertainers and of course you awesome ponies for coming here for an awesome time :) You all are what make this community great, Trotsdale has been around for four years and it's all because of you guys."

No doubt the fifth anniversary party will be a blast as well.